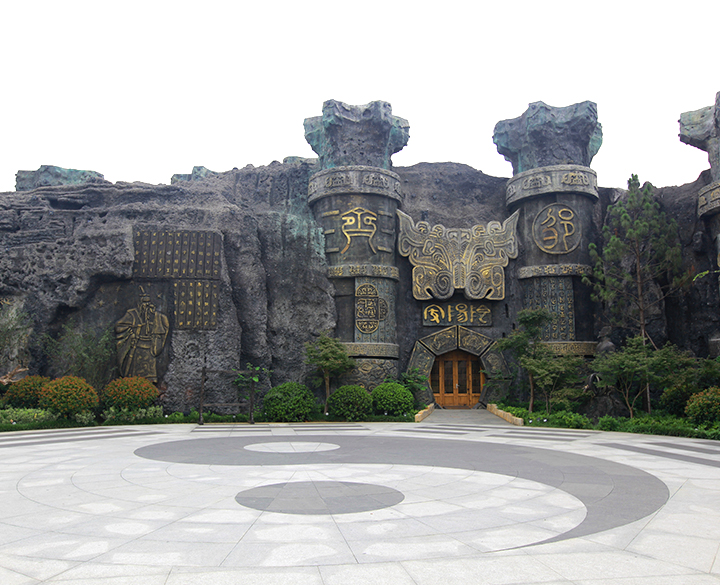 “Yin and Yang”, making their debut in I Ching, interpret the provenance of all things including the universe at large. The notion of “Five Phases”, consisting of Metal, Wood, Water, Fire and Earth, sprang into form in The Book of History. The two concepts had not begun to converge until the Warring States Period. This is the origin of Naturalists i.e. the School of Yin and Yang and Five Phases.

This scenic spot, set in a giant black aerolite, epitomizes what yin and yang really mean through Seven Stars of the Big Dipper, Eight Trigrams, etc. The man looking up the sky, in front of the rock, is Zou Yan, a native of Qi State, who is well-known as the best embodiment of Naturalism. Erudite as he was, the grandmaster expounded the cosmic evolution and rise and fall of dynasties applying the doctrine of Five Phases and Yin and Yang. So, he has been called “Yan Talking Celestial Phenomena” as a notable of Jixia Academy. This academy was the earliest institution of higher education and primordial science. According to some scholars, it appeared merely 20 years later than world-famous Plato’s Academy. Legend says, to promulgate his doctrines, Zou Yan toured various countries, being revered by all kings. When he arrived in Yan State in the north, the king in person swept the road for Zou Yan and took him as his own mater. Even sages like Confucius and Mencius had never enjoyed such honour. Obviously, his theory gained overwhelming prevalence during that period.